Literary Post-mortem in Jaffna: Ploughing the Wounds of Conflict

Sanitized version of my article below in "The Hindu"
http://www.thehindu.com/features/metroplus/events/let-the-healing-begin/article5006799.ece 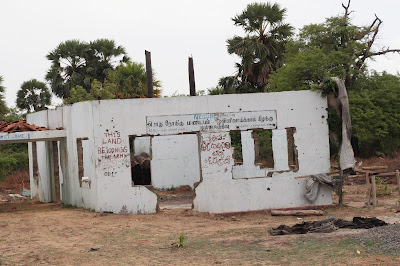 "Absent, I come to the home of the absent “ - Poet Mahmoud Darwish

Traveling on A9 highway connecting rest of Srilanka to Jaffna Peninsula, the former rebel runway, now reconstructed as carpet road which shines as Chinese currency running parallel to the new railway track that is an Indian "work in progress" can make your ride feel nails in the air. 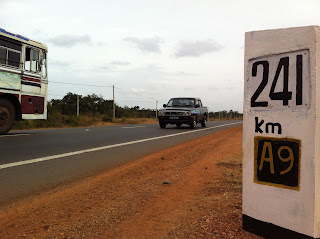 Even my Sinhalese friend who drove me to Jaffna was embarrassed by the distasteful hoardings of Rajapakshe grandiosely propagating development schemes like "Vadikkil Vasantham ; Kizhakkil Udhayam" (Spring in North ; Sunrise in East).

The shrub jungles on both sides of the road were clothed in military green with the Srilankan Army having a strong presence here. The green did little to calm our senses as nothing could hide the sight hide the plain sight of a disabled man passing the street or a forlorn lady with cotton wool draped over eyes, cradling a paralysed child in her arms. What is even distressing is that people wait in woe for alms from anyone who looks tourist or “NGO”ised. Strange block homes are cropping all the way like mushrooms after a quick rain.

Shrouding over this dreary picture are the ultra-Buddhist nationalist motifs, more so the stark reality of their omnipresence. A series of check-posts at points such as Omanthai, Elephant pass as true memoirs of a war, simply refuses us to break from the past.

When I made my trip to Jaffna for the 41st Ilakiya Santhippu(Literary Meet / July 20, 21) official in my facebook page, several trolls (those overtly fond of sowing discord in the virtual world!)  alleged that I was a stooge of Rajapakshe. A visit to a country whose government looks at a mere television remote controller as a serious threat to its sovereignty could spell horror to any free-thinking person. However this time around, with boycotts bearing eerie resemblance to State Censorship.

Thinking along those lines, I sometimes wonder how nationalistic I can feel about holding Indian citizenship considering the human rights excesses committed by the Indian State in Kashmir and North East. Sometimes the whole debate on who has less blood in their hands can be quite insinuating.

All the early forty editions of "Ilakiya Santhippu" were organised in European cities and Canada by exiled writers and artists during the last thirty darkened years of unscrupulous censorship by both State and Liberation Tigers for Tamil Eelam(LTTE) in the island. Authoritarianism on both sides had extracted a heavy human toll since dissidence was always considered as treachery in the tragic war. Writers, artists and activists who held opinions different than that of the dominant one in vogue were viewed as traitors and were killed in broad daylight starting with Rajini Thiranagama (Author of Broken Palmyrah). Infact Ilakiya Santhippu had one of its frontier writer / thinker Sabalingam brutally murdered in France and they had to dedicate the following edition to "Writers who were killed and also who are likely to be killed". Thus the conscience of the expatriate free thinkers kept ticking in the form of Ilakiya Santhippu , as small magazines and radical publications, refused to be “silenced” which was viewed as yet another form of death. I recall what our late Edward Said quoted as to “pit the power of culture against the culture of power”

There was another argument that what would Ilakiya Santhippu bring to the thousands of poor and the displaced, the bereft and victims of Srilanka’s war. But should art relinquish after a defeat? Can fear preoccupy the space for dialogue? If so, how and who will engage with the political polemics? Is it possible to escape a post-mortem of war crimes and severe loss of civilian lives? Who is a writer then?  What is the role of writers and artists in the time of crisis and social upheavals? When people’s identities have been destroyed individually and culturally and in the process of destruction, how and who will voice the conflict? Can literary production heal the trauma? I believe that these questions have to be kept alive even if we do not have immediate answers.

Young Poet Vijayaletchumi, in one of the poetry sessions at Ilakiya Santhippu, read “Photographs/ hang in all houses amidst /joss sticks smoke/ and floral offerings/ of village youths/ eclipsing the portraits of gods (Poem “Paled East”)” Her lines mourn every Tamil household for their loss of family members, and pride. In this given situation, we need to reflect on what oft-uttered words such as reconciliation, progress, development and importantly, that most cherished or abhorred word ‘nation’ mean amidst all the suffering and loss of lives.

Sessions on caste, gender, transgender and sexual minorities, nationalist and critical of nationalist literature of North / East Tamils, writings of Malayaga(hill country) Tamils and Tamil-Muslim nationalists, secular Sinhalese; Diaspora literature, traditional art and folklore with speakers from the respective regions and ethnicities signified the aspirations of a war ravaged community to build a civil space for a plural and an open discourse.

The literary community, however, also struggles to locate an inclusive Srilankan Imaginary, where the majoritarian Sinhala polity triumphantly declares that minorities no longer exist in post war Srilanka.

Nationalism, as collective consciousness in times of crisis of exclusion held the community together and aided the abundance of literary production but also constructed the ‘other’ as an enemy and divided. Divided humanity subsequently made women, the socially underprivileged by caste/ class and sexual minorities even more marginalized. Sinhala Buddhist Nationalism and its oppression tactics evolved Tamil Nationalism while the violent extremities of Tamil Nationalism led to the formation of Muslim Tamil Nationalism. Added to it, the caste dynamics of Northern Tamil psyche further excluded Hill country Tamils to emerge Hill Country Tamil Nationalism. Artists became refugees and refugees became artists because of political pressures and crisis in cultural identity creating exile literature. Hence literature in Srilanka is deeply polarized reflecting the deep divide between ethnic communities.

There was always literature production which on one hand promoted ideologies of ethnicity, nationalism and violence and on the other hand critiqued the notions of nationalism and called for meaningful inquiry into human dignity and values. This contrast between the ideal and real evidently epitomized Ilakiya Santhippu and “Guernica”  - the 800 odd pages Literary Journal edited by writer Shobasakthi and team with contributions from 12 countries, which was released in the meet. “Guernica” indeed was a reflection on the longing for humanistic ideals after decades of trial, error and trauma. 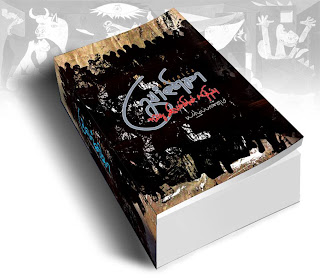 Sinhala Novelist Liyanage Amarakeerthi while discussing Tamil Characters in Sinhala criticised that they just use them to push the meanings forward. He pointed out the fragile sense of guilt within Sinhala writers community with examples from Writer Jayathilaka Kammellaweera’s short stories “Poy Solla Vendam(Need not lie)” and “Are you alright?” He remarked about how Sinhala writers are generous enough to share love with Tamils but not the State.

Writer-Translator So.Padmanathan, who chaired the session, shared his dilemma in translating Poet Nufman’s resistance poem about burning of Jaffna Library. With his deepest respect and love of Buddha, he could not translate “Butharin Padukolai” as “Buddha’s Assassination” and had to give a title “Murder”. Poet Sumathy Sivamohan discussed about how to generate meanings outside of a poem’s immediate site of writing. She spoke about one of the prolific Poet Sivaramani who killed herself in 1991 after burning cinders from of her poetry. Sumathy Sivamohan recited the violence that mournfully leapt out of Sivaramani’s untitled poem “When a gun is pointed/at the umbilical cord/of this society/the dream of a butterfly/that can balance itself/on a thin flower bud/is only an incident/that I cannot relate to/ I, in my effort to live as human/prefer to leave the flowers to the tree”; she stated that this was not merely symbolic but about a real gun that belongs to LTTE.

Writer Lenin Mathivanam proclaimed “Malayaga(Hill Country)” Tamils who were brought by British to work in tea estates are the first and foremost to write Diaspora Literature. He observed the hill country Poet Meenatchi’s as the pioneering voice against the repressive Sinhala Buddhist regime. Nawaz Soubi while presenting his research on Tamil Literary Histories compiled so far, proved with evidence on how the anthologists neglected “Asanbe Sarithiram” though being the first novel written by a Tamil Muslim.

Veteran Writer Theniyaan, in his sessions on Dalit Literature briefly described the repertoire of Novelist Daniel and discerned how LTTE silenced Dalit-related issues and never committed on the abolition of caste. Dalit sentiments were stronger in questioning their place and dignity in “Eelam”, the separate Tamil homeland being fought for all these years.

Writer Activist Chithralekha described how Tamil women were free to have a gun but not free to write on sexuality, religion and critical politics. Rape culture by hegemonic Sinhala State, Indian Peace Keeping Force and within Armed Movements might be hid in the pages of history but not in the pages of women literature. Poems like Koneeswarigal by Kala and Krishanthy by Vinodhini give us ‘her’ stories. Transgender Writer Activist Living Smile Vidya , a participant from India presented a historical session on transgender life and literature to a community where even “coming out” of sexual minorities cannot be construed as reality. Debates went to new heights when audience recalled how LTTE killed transgender people in the name of punishment since prostitution was considered criminal in their political constitution. Writer Stalin from France traced the history of Diaspora literature since during 80s when the refugee phenomenon started and it sounded more like a murder mystery as he revealed how writers and thinkers gave their life to the “traitor” culture. War had displaced hundreds and thousands of Tamils internally and externally and that had a direct impact on literary production in Tamil.

After drenching myself in the literary floods of a stark and oppressed culture,
I found myself asking, can freedom be possible at the cost of humanity? In fact it was a question that resonated in the mind of every literary enthusiast, writer, journalist, poet and artist from Tamil, Muslim and Sinhalese communities across the Island and from India, Canada, Germany, France, United Kingdom and America who gathered in Jaffna for this literary meet.

I must say, everyone had given whatever they could to come to terms with the despair of defeat.

Posted by leena manimekalai at 8:48 PM