In January 2011, the Indian Censor Board banned the screening of Leena Manimekalai’s film Sengadal, The Dead Sea. Depicting the plight of Tamil fishermen refugees as they flee a war ravaged Sri Lanka into India, Sengadal, like Manimekalai’s eight other films, gives voice to an oppressed community.
Only after a long and exhausting legal battle was Sengadal recently cleared for public exhibition with an A rating (for adult audiences only). Manimekalai feels “this is a moment of victory for one’s artistic freedom. This confirms that art prevails over the state’s power.”
A strident supporter of artistic freedom, Manimekalai refuses to confine herself to a single creative medium. Apart from being an independent film maker, Manimekalai has also penned three poetry collections. Her films have won accolades in film festivals both in India and abroad and have been screened by many social activist groups. Hailing from Tamil Nadu, India, Manimekalai’s art is a rebellion against caste and gender persecution.
In this interview with Sampsonia Way, Manimekalai reveals how her past shaped her artistic vision and explains the challenges that plague her as she strives to retain an independent voice.
………. 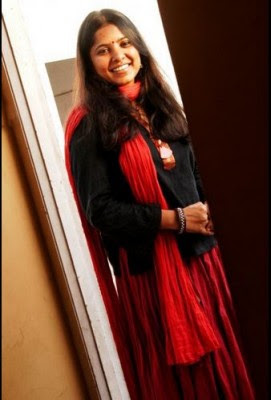 You were originally trained as an engineer. What turned you towards film-making?
I am a madwoman, and my vision is an open sea. I never wanted to be someone counting the boats going by. In fact, I am number blind. Additions, subtractions, multiplications and divisions appear like double lies to me. As a child, I pretended to be good at math and science just to keep my parents happy. As a middle class girl of a ‘third world’ family, when you get qualified and enrolled in a professional degree, you can only do ‘n’ number of things, and your family questions your actions less. But I hate a secure life. One’s mind stops working when ‘secured.’
When I started my independent life, I stopped trying to make others happy and started chasing myself through writing, cinema and being in love. Of course, this was a difficult and unsafe choice, but I decided to be faithful to my desire and freedom of choice. I happily abandoned my Instrumentation Engineering and started following my intuition. Now I am able to question inequalities, resist oppression and strive towards change.
What was your childhood in India like?
I was born into a farmer’s family, south of Tamilnadu, in a village called Maharajapuram at the slopes of the Western Ghats of the Virudhunagar district. My late father was a Tamil professor and the first to earn a degree in our family. My mother is a real earthy soul with an unlimited spirit and energy. I went to school in an urban Anglo-Indian Convent where I was strictly scheduled by early morning athletics, eight hours of subject classes, two hours of bharathanatyam (dance), one hour of carnatic music, and weekend hindi classes. However, my body always resonated with my aimless summer life of cattle, pagan gods and goddesses, the occult, Sathuragiri hills, rain-fed rivers, deep wells, cycling, swimming, stealing fruit, and the kittipuli (country games) in my village. A gypsy inside me wakes up the moment I think of my home.
How did your sense of revolution grow out of this environment?
All of the men in our family seemed to be interested in revolution and practiced hard-core left politics. They held district-level, state-level and national-level positions in the Communist Party of India. The women in the household ran the kitchens, cattle and paddy fields to make a living. I guess all my questioning and rebellion started from that point of conflict. The other major issue is India’s caste system. I refused to identify with my family, or any community which directly stamped on me a caste and put me as inferior to some and superior to others. This hierarchical system, which enrolled me for a life I didn’t choose, has made me question my very existence.
.
You started your career with several large media companies in India. What was that like? Why did you instead turn to documentary film-making?
In two years during my early twenties, I switched jobs 11 times. I was never loyal to companies. The canonical figures of mainstream cinema were so feudal I did not belong to them as an apprentice; either they spit me out, or I left. But cinema as a tool of expression still captured my imagination. Digital cinema was a democratic, independent space not dictated by the market, and its possibilities enthused me in a way the industry did not. Independent cinema can help someone find their voice; it is also for people who want to be heard. I am perpetually seeking both of these things, so I attached my body to a handy-cam, microphone and mac-book, and started my endless drive toward exposing society’s hidden truths and dark places. 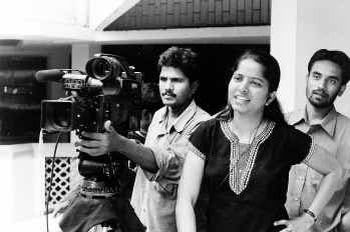 Photo: The Hindu
Your film Parai on caste discrimination, specifically on Dalit women, was cut 19 times by the Indian Censor Board. Could you talk about that experience?
The experience with Parai is intriguing. It was more a movement than a piece of video. Yes, the censor board demanded 19 cuts of a 40-minute film, which I set aside. But the film was also presented to the National Women’s Rights Commission and the National Human Rights Commission. The commissioners were forced to take action against the censorship since they were featured in the film taking petitions from the affected Dalit women. Seventeen oppressors were arrested by the District Collector, and the issue gained momentum. Thousands of copies of the film were made and distributed state-wide for advocacy and awareness programs.
Censorship is an insult to a thriving society and it feels like it’s mutilating my organs. It ceases my being. Religion, State, Caste, Culture, Gender, Language, and every other institution are monstrous agents of censorship. I resist, and that gives me some reason for hope.
Despite the Censor Board’s decision, you managed to screen the film by alternative means in about 200 villages. How did you do it?
I short-circuited myself from the mainstream outlets and travelled to hundreds of villages with a set of DVDs, a player and a projector. I showed films on the white walls of corporation schools, on the loins of villagers and on street corners at night. People were always willing to talk, share and debate over the work; this participatory dialogue is what completes my films. I owe all my understanding of my society and people to my experiences of screening films. Each screening is both a process of learning and unlearning.
Do you have a moral or artistic philosophy toward making and screening your films?
I only choose subjects in which I can also place myself as a subject without any compromise. Dealing with a community is not like dealing with actors. I have to be more responsible and committed to fight until the end. I do this with all of my energy, even when I don’t get anywhere. I do not believe change happens in one night through one film. Change is a long process. This is why I attempt to create a participatory dialogue with my films. I experiment, and sometimes I fail, but the idea is to seek answers collectively. Only when all the elements—the film, its maker and the audience—participate and interact equally, does the film attain its fullest form. 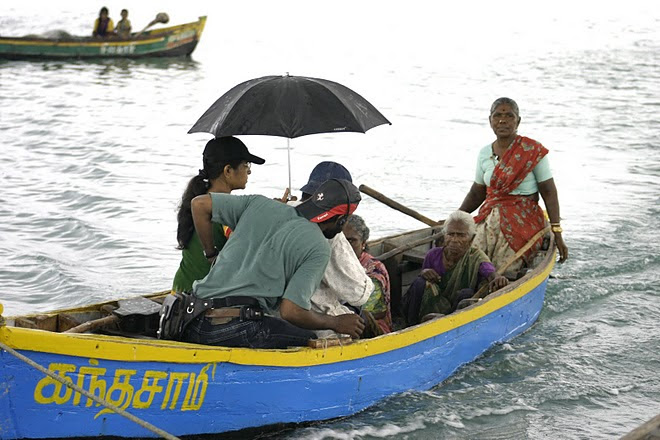 Manimekalai with Sethurakku, a fish hunter, shooting Goddesses .
Despite highlighting the unflattering lives of certain Indian women, your film Goddesses won the Golden Conch at the government-sponsored Mumbai International Film Festival in 2008. However, your most recent film Sengadal, which deals with the plight of Tamil refugees, has been stayed by the Indian Censor Board. Can you explain the structure of censorship in India?
When the Mumbai Film Festival tried to introduce censorship only for Indian entries, independent filmmakers all over the country stirred against the double standards of the Films Division of India, and the festival had to withdraw their regulations. But still the fight continues with the National Awards and the Indian International Film festival. It is a slap in the face of independent Indian Cinema. Making a film is only half the battle; what use is it if it is not seen?
In India a film needs a censor clearance for both telecast and theatre releases. Why is a filmmaker, who has taken up cinema seriously, denied the right to reach a wider audience? Consequently, why is my audience denied their basic right to see a film uncut? It is a scary situation not only for artists but for all citizens of this “democratic” country. Our basic freedoms of expression are at stake.
In addition to the dozen films you’ve self-produced, you have also published several books of poems. How has the public received your written work?
I still consider myself an evolving poet, but my first Tamil poetry anthologyOtraiyilaiyena (As a Single Leaf) has seen three editions so far. On the other hand, my second book, Ulagin Azhagiya Muthal Penn (The First Beautiful Woman in the World), has invited mixed reactions: It received the Iyal Poetry Award for 2009, a call for its banning by some Hindu People’s Party, and repressive attacks by some ultra left fanatics like Makkal Kalai Ilakiya Kazhagam. My third poetry collection Parathaiyarul Raani (Queen of Sluts) has just been released.
Does you poetry also have enemies?
Obviously, my poetry is dangerous to religious and ideologically fanatic minds. Language is my first enemy; its norms, design and usage are controlled by the dominant patriarchy. My language’s linguistic codes are embedded in a culture- and gender-specific socialization that prohibits women from communicating about issues that are considered socially disruptive. In my work, I try to challenge this structure. I stray from every possible institution because none of them have done justice to women in the whole of human history. Poetry is life and not imitation; if this life is dangerous, then let me face it; for me, safety is slavery.
Read English translations of Leena Manimekalai’s poetry.
Posted by leena manimekalai at 2:14 AM